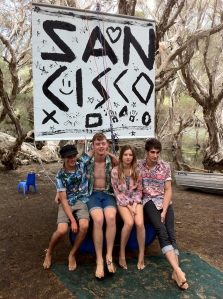 Crossing borders and stepping into another scene is a rejuvenating experience from and change of routine. The ability to listen, learn, adopt, and share is at our disposal on a day-to-day basis, which is something as listeners we all need to capture.  As bands pop up like microbreweries across our state lines we all need to make it a point to introduce new music to our neighboring scenes. Much like we reach for a new local beer to taste, we oftentimes accidentally reach for an import and end up take a trip abroad.  I introduce you to San Cisco – Australian for indie pop.

San Cisco is the third artist from down under that we’ve featured on Thought on Tracks within the last few weeks, following ScotDrakula and Field Trip. The band released their debut LP Golden Revolver last year and has followed up in 2012 with a new EP entitled Akward. San Cisco has clearly adopted the expedited release formula to remain relevant.  Flying off the coattails of Aussie counterpart, Gotye, San Cisco will attempt to cement visa status this year on U.S. listeners.  Jump into the Australian scene and get ready to soar with “Rocket Ship.”