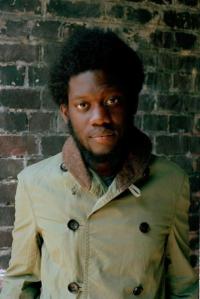 Once in a while, an artist comes along with a voice that taps at the deepest, innermost part of the self-conscious. The part that decides just what type of person we are. Such a voice is timeless. It can be played anywhere to an audience of any language and the intensity of emotion will resonate and burn through with equal effect.

Michael Kiwanuka was raised in North-London, the son of Ugandan immigrants. Until last year, he was working as a session guitarist, while gigging tiny London clubs in the evening. Before long, he had caught the eye of The Bees’ Paul Butler, who brought Kiwanuka to Isle of White to record what would become his debut EP, Tell Me a Tale. Listen to the title track below.

Rather than make the inevitable comparisons to the forefathers of soul and R&B that Kiwanuka’s voice immediately brings to mind, let’s settle instead on a statement we can all agree upon: this shit is fucking good. Slap an innocent bystander; snap the hinges off of the bedposts good. Listen to “They Say I’m Doin’ Just Fine” below.

Kiwanuka shot forth from the basements of British pubs like a canon. By the start of this year, he had served as the opening act of Adele’s European tour, released another two more EP’s to account for a total of nine songs, signed with Polydor Records and had been Christened by the BBC as 2012’s next big thing. A meteoric rise for a man that only a year ago was laying down riffs for Tinie Tempah and has yet to turn 25 years old. Regardless of his age or experience, the results speak for themselves. Watch the video for “Home Again,” the title-track from Kiwanuka’s latest EP below.