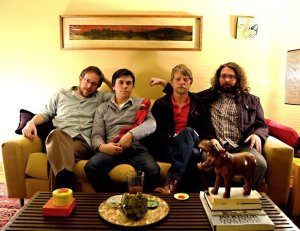 Some intriguing sounds are floating their way up I-65 these days. Louisville band Nerves Junior’s release As Bright As Your Night Life made a significant splash across the indie blogosphere last year, despite their lack of mainstream coverage as recently noted by hometown champion The Decibel Tolls. The latest band from south of the border to catch my attention is Whistle Peak. Their sophomore release, Half Asleep Upon Echo Falls, from Karate Body Records is due to drop on Valentine’s day. The album’s first single “Wings Won’t Behave” has a bounce in its step that makes me nostalgic for Motown, with vocals that maintain the uncanny ability to feel at once melancholy and deceptively cheerful. The lyrics of lead singer Billy Petot have a tendancy to wash over the listener like a brief summer rain on a lake – before you can adjust the drops have passed and the sun has returned. Listen below:

Whistle Peak is yet another Midwestern group that deserves a larger regional following. Last summer the band dropped a video for the song “Gold Teeth” from their debut self-titled LP. The video footage appears as if it could be from some pre-cursor to the Planet of the Apes, where primates have overran a rural, early American outpost. Like “Wings Won’t Behave,” this track exudes the same sleepy frivolity. From the video, we can discern that this is not a band that takes themselves too seriously. If there is a hidden artistic agenda in watching a monkey barber, then it is over my head. For those of you who prefer your sounds via vinyl, Whistle Peak will be issuing 250 copies of their new LP on wax. Act fast.