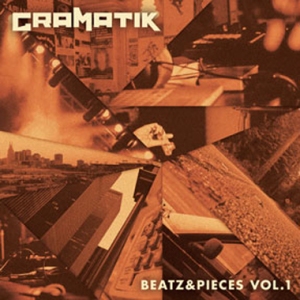 Gramatik’s Beatz & Pieces Volume 1 has been in constant rotation the past few weeks. While DJ music is rarely a comfort food for me, these beats are addictive as hell. Laden with soul samples and hip hop breaks, I challenge anyone to listen to this album only once. Our friends at the sensational music blog, The Fridge Media, had this album covered from the moment it dropped. Check them out, they have an exceptional site and are always on top of their game. Rather than toss off a sub par review of my own, they were kind enough to allow me to share theirs! So, without further ado…

Gramatik’s debut on the Pretty Lights Music label, Beatz & Pieces Volume 1, makes good use of the new resources at his disposal. While it is easy to draw comparisons to Pretty Lights’ sound, I urge anyone who decides to give this album a spin to not make any such snap judgments; it is more than capable of standing on its own. Gramatik’s personality and heritage seep out of the album’s sound separating it from the huddled masses of electronic music while giving the album its own distinct flavor. The major indicator of quality electronic music, to me, is the ability of the artist to convey their personality through the synthetic medium. This aspect of music, eliciting emotion and displaying the character of the creator, is what allows a listener to form a bond with the art, and is much easier to hear or feel through traditional, dare I say, organic music. And while often sought after in electronic music compositions, it is rarely attained. Yet, Gramatik manages to do so with Beatz & Pieces Volume 1.

The first styling of Gramatik’s choosing is the combination of two distinct fashions of vocal samples. Present are vocals that are reminiscent of those utilized by Pretty Lights, but also thrown in the mix are higher vocals transposed up several steps. Starting with track one, these vocals can be found from beginning to end. And while this constant use of the generally same vocal samples could easily become hackneyed, Gramatik owns it. They simply do not become tiresome.

The upright bass, carrying the groove of the track, sets the chilled out tone of the album, separating Beatz & Pieces Volume 1 from the sounds of the rest of the Pretty Lights Music label. Using the sound design that has brought Pretty Lights notoriety, Gramatik slows things down creating a experience much better suited for casual listening than one would initially expect. With that said, the album brings the noise with authority, evidenced by the album’s first single “So Much for Love”, which makes an early appearance in the fourth slot, and manages to balance a wonderful hip hop feel while bringing the funk as well through some very nice horns and keys. This one is ready for consumption by the masses.

The slower tempos and vocal stylings are merely the beginning of Gramatik’s musical personality impressed upon the listener. The native Slovenian draws on his heritage granting the listener a gift of wild blend of sound while simultaneously paying homage to his background. Just check out “The Drink is Called Rakija”. There just has to be some Central European inspiration behind this track. Slightly redolent of Beats Antique when the track gets going, it departs from this comparison rather quickly ending with a serious polka-esque(?) type vibe.

Gramatik invokes even more of his roots “Moar Jive”. You know this one already whether you think so or not. The track might seem rather silly and slightly novel; you cannot deny it is fun. Specifically when the song goes off in a random direction catching this listener completely by surprise. Then, at just the right time, those high, transposed vocals reappear and we are back: everything has come full circle. This track gives you a nice taste test of Gramatik’s unique flavor; however, you really should consume the album in its entirety at least once. Actually, give this album two, three, four, or even more listen. I promise it only gets better with each subsequent spin.

Beatz & Pieces Volume 1, certainly does employ similar sounds, vocals, and effects to those you hear on any Pretty Lights album, but Gramatik chills things down and draws on his own unique experiences to create his own unique style of European influenced trip hop. The single most important or defining aspect that separates good electronic music, or even good music in general, from the throng of noise is whether the personality of the creator is not only present but prominent throughout a track, album, or mix. Not only is Gramatik’s personality prominent throughout this album; it permeates the album. Flying Lotus does it. Pretty Lights does it. Samiyam does it. Lorn does it. And on this album, Gramatik does it. The only challenge before Gramatik now is to continually allow his personality to infest his noise while not relying on the exact same sound design.

Review courtesy of Scott Watson and The Fridge Media.
Thanks again guys!